Day two in Brussels – and I am at the European Consumer Summit organised by the Commission. This afternoon, I listened to Didier Reynders, the new Commissioner for Justice and Consumers, explain the EU’s priorities for future consumer policy.

The speech will probably be released in due course, and I can update the below as needed, but here are some points that I jotted down while listening.

By the end of this year, the Commission will publish a new consumer agenda for the first time since 2012. The focus would be not just on protecting consumers, but empowering them. This, he said, would include ensuring that the proposed Directive on consumer collective redress was passed quickly, so that consumers could better enforce their rights themselves; he was working hard to see its adoption by mid-2020. (You can find further information on how things stood at the end of last year here.)

Overall, the Commission’s priorities in this space will be “human-centric” digitalisation and addressing climate change and the loss of biodiversity.

Fairness and safety in the digital economy

On the digital economy, Commissioner Reynders said that we could expect:

He also mentioned that the Commission wanted to look at how to improve the effectiveness of product recalls; surveys showed that as many as 1/3 of consumers continued to use products which they knew had been recalled by the manufacturer.

As regards the green deal, the focus would, he said, be on empowering consumers who want to make more sustainable choices and to fight climate change. He said that since households are the second largest emitter of greenhouse gases, change was necessary to meet the Commission’s political ambition of being the world's first climate neutral continent by 2050. The Commission would look at:

For both AI and the green agenda, he said, the accuracy of information provided to consumers was key.

On a number of occasions, Commissioner Reynders stressed that a high level of consumer protection is a “core European value”. Those who want to sell goods or services into Europe needed to understand that, he said. There may be a message here for the UK government in terms of regulatory alignment, as it seeks to negotiate a trade deal with the EU.

On that subject, he said that it was “very regrettable” that the UK would leave the EU tomorrow, but that this would also mark the beginning of a new relationship and the EU would need to reflect on its future cooperation on consumer issues.

On a number of occasions, Commissioner Reynders stressed that a high level of consumer protection is a “core European value”. Those who want to sell goods or services into Europe needed to understand that, he said. 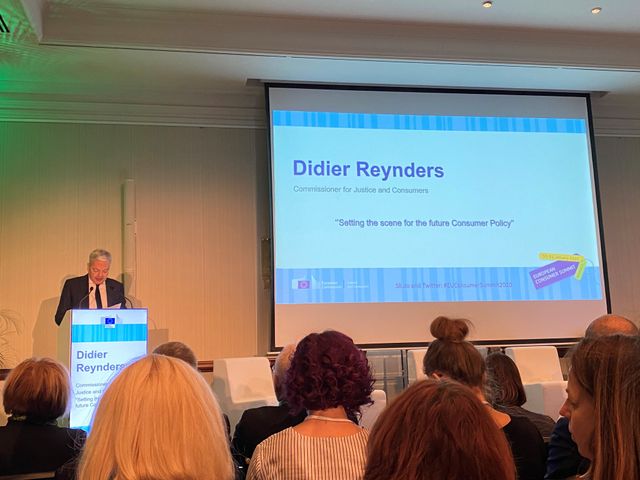