Earlier this week, the UK's Cryptoassets Taskforce (consisting of HM Treasury, the FCA and the Bank of England) published its final report, providing an overview of cryptoassets and underlying technology, assessment of the risks and benefits and the path forward for UK regulation.  The paper sets out a good summary of the key concepts in distributed ledger technology so is worth a read from that perspective.

Whilst the overarching message is that the three members of the Taskforce continue to support the development of distributed ledger technology, of particular interest to me (and given the questions we get on a fairly regular basis, quite a large number of clients as well) was that the report goes into the current treatment of types of cryptoassets and sets out guidance for the consultations that are coming down the track.

The Taskforce considers there to be three broad types of cryptoasset: exchange tokens (which are like bitcoin), security tokens (which are ‘specified investments’ for the purposes of the UK's regulatory regime, and may provide rights such as ownership, repayment of a specific sum of money, or entitlement to a share in future profits), and utility tokens (which can be redeemed for a particular product or service).  This is similar to the Swiss FINMA's guidance which I posted about earlier this year, but covers all cryptoassets, rather than just ICO tokens.

Chapter 5 of the report sets out a table on the next steps which the members of the Taskforce plan to take.  This seemed particularly helpful in relation to knowing when to expect incoming consultations.

There are a number of ongoing matters with no timing included in the paper as well.  For example, the PRA is currently assessing the adequacy of prudential regulations, including for capital, which apply to cryptoasset-related exposures of banks, insurers and designated investment firms - we posted about the Dear CEO letter that was issued as part of this work.

The Taskforce has concluded that DLT has the potential to deliver significant benefits in both financial services and other sectors, and all three authorities will continue to support its development. HM Treasury, the FCA and the Bank of England will take action to mitigate the risks that cryptoassets pose to consumers and market integrity; to prevent the use of cryptoassets for illicit activity; to guard against threats to financial stability that could emerge in the future; and to encourage responsible development of legitimate DLT and cryptoasset-related activity in the UK. 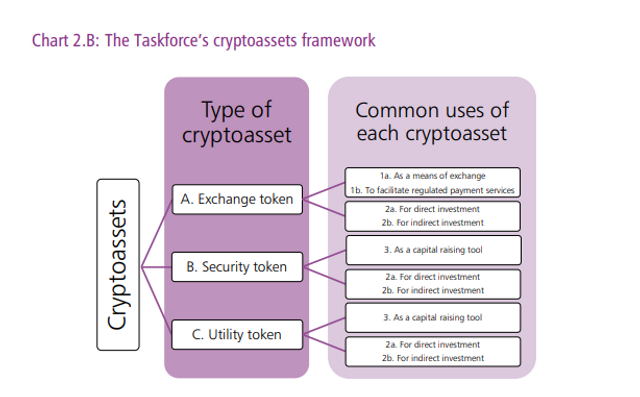